skip to main | skip to sidebar

In recent years, aggressive physical rehabilitation programs have emerged that seem to restore significant function in many with SCI, even years after injury. Sophisticated devices and technology have been developed to catalyze such function-restoring rehabilitation, such as GIGER-MD® locomotion system (www.gigermd.com) or the Locomat® robotic treadmill training (photo) (www.hocoma.com).
Frequently, these programs are used to maximize restored function after an innovative surgical procedure or other intervention. Often videos are created to document the patient’s functional improvement, and given the impressive nature of the physical activities that could be done after but not before treatment, it is assumed that the recovered ability documents efficacy.
However, this assumption may or may not be valid. It is possible that little of the restored function is due to, for example, a $50,000 surgery but rather attributed to the rehabilitation aggressively pursued after the surgery but not before. If functional recovery after a surgical intervention depends upon a slowly regenerating neuron reaching an anatomically distant target site, it will take a relatively long time for new functional improvements to appear. If during that period, the patient has sustained an aggressive physical rehabilitation program, it is not unreasonable to question, as many scientists, indeed, do, what is the true cause of the improvement. Because of this concern, some surgical interventions are now requiring patients to aggressively rehabilitate before the surgical intervention as well as after.
Furthermore, if a patient believes with heart-and-soul conviction that the surgery/intervention will help him recover some function, it will shift his consciousness from the pre-surgical “you-will-never-walk-again” attitude that is often imprinted on patients by medical authorities to a self-fulfilling belief of what may be truly possible if he works hard . The patient’s will propels him to new levels of function, much of which, in fact, may have little to do with the surgery/intervention.
Even considering it alone without any potentially confounding intervention, physical rehabilitation is a complicated area in which observed improvement may be due to a number of causes separately or in combination. First, through a variety of physiological mechanisms, including growth-factor stimulation, aggressive physical rehabilitation in many individuals with SCI probably does trigger some neuronal regeneration.
Second, it may activate dormant but intact neurons that transverse most injury sites, even in injuries clinically classified as complete. Studies suggest that only a small percentage of “turned-on” neurons are needed to regain significant function.
Third, the spinal cord in itself possesses intelligent and not completely subservient to brain oversight. Specifically, the spinal-cord’s “central-pattern generator” can sustain lower-limb repetitive movement, such as walking, independent of direct brain control. With training and appropriately designed leg braces, impressive ambulation may be observed with minimal if any neuronal regeneration.
Fourth, many muscles above the injury site affect ambulatory potential, especially when using appropriately designed leg braces. For example, the latissimus dorsi, a muscle innervated from the spinal-cord’s cervical region, can influence pelvic-area movement and, in turn, ambulatory-associated motions (Anton Wernig, private communication).
Fifth, increasingly, many scientists believe that there are intriguing possibilities about the integration of different neurological systems above and below the injury site, which, although making our understanding of the nervous system more complicated than once assumed, generate rehabilitation opportunities.
Sixth, aggressive physical rehabilitation programs are often initiated relatively soon after injury in a period in which there is already appreciable recovery potential. Once again, it is often difficult to determine how much recovery is due to a specific program and how much would have occurred anyway. Advocates of the status quo and critics of the innovative tend to be skeptical of the results produced by innovative rehabilitation programs as phenomena that may have occurred anyway. The growing base of both scientific and anecdotal evidence suggests that aggressive rehabilitation programs magnify recovery potential.
Finally, confounding understanding even further, in paradigm-expanding speculations, some scientists believe that it is possible for brain-directed function below an anatomically complete injury site. For example, Albert Bohbot, whose laserpuncture work was described previously, believes that there is a sophisticated interaction between our body’s electromagnetic energy channels/systems/fields and our nervous system that can bypass the injury site . Although beyond mainstream biomedical thinking, this is entirely possible under Eastern- and other esoteric-healing philosophies, and, as such, it has been suggested that martial-arts study, which emphasize energy-flow and control, would facilitate this potential.
Summaries are provided below on various private-clinic and university-based rehabilitation programs that may restore some function after SCI. The agendas and priorities of the programs in these two settings often vary greatly. The latter is often research driven with the goal of publishable professional papers and awarded grants, and with the former, research by itself is not the goal but the production of real-world results that economically sustain the program.
Publicat de Mihaitza la 13:43 7 comentarii:

A 50-year-old man paralyzed from the neck down in a devastating motorcycle accident ayear ago is learning to walk again with the help of a robot named Lokomat at UT Southwestern Medical Center at Dallas. Chuck Benefield of Dallas was riding his motorcycle on a quiet country road when a car rear-ended him, throwing him from the bike. When he awoke from a coma 11 days later, he learned he was paralyzed. "I was banged up real bad," Mr. Benefield said. "The doctors said it was an incomplete spinal- cord injury, and I would probably never be able to walk again. That was hard to adjust to."But that was before he met Lokomat.Physicians and physical therapists at UT Southwestern are using the device to teach Mr. Benefield to walk again.The robot provides "gait training" by teaching a patient's spinal cord and brain, with sensory information, to signal the body to step again. A harness supports the patient's body weight over a large treadmill. The legs and hips are strapped into the machine's robotic exoskeleton, which simulates a fluid walking motion. A computer records precise movement measurements and plots them on a graph, which is displayed in real time on a nearby monitor and allows patients and therapists to track progress.UT Southwestern is the only institution in Texas and is among only a handful in the nation using the new machine. During conventional treatments, patients are supported by a harness over a treadmill, but a therapist must manually move the patient's hips and legs. The procedure is extremely fatiguing to the patient and the therapist, and the patient's spasticity often cannot be overcome to accomplish gait training."The robot not only provides specific and consistent training parameters and the needed power, it can also quantify the patient's responses, freeing the therapist to make ongoing adjustments in the robot and improve the patient's stepping," said Dr. Keith Tansey, who coordinates the medical center's new multidisciplinary, interdepartmental clinical program for spinal-cord injury and is an assistant professor of neurology and physical medicine and rehabilitation.Dr. Patricia Winchester, chairwoman of physical therapy, said: "The functional results we see with body-weight supported treadmill training go beyond improved muscle performance. Our observations support the theory that locomotor training on the treadmill is driving reorganization in the spinal cord and brain."Supporting body weight reduces the postural challenge patients face during walking. The Lokomat moves the legs in a normal physiological pattern that helps the spinal cord relearn to step." Mr. Benefield, who has regained some use of his arms, has been using Lokomat for about a month and said he could already see results in his lower extremities. He is regaining muscle tone and feeling in his legs; the swelling in his ankles and calves is gone; and he has more mobility."I wasn't getting near these results with manual gait training," Mr. Benefield said. "It's just a night and day difference. I could walk for hours, if they'd let me. The therapy has been really good, and it's such a good feeling when you come off it." Researchers are recruiting patients with spinal-cord injuries to participate in studies involving Lokomat technology. Eligible patients must have range of motion in the hips, knees and ankles to allow an upright stance. Patients are ineligible for the study if they have a history of long bone fractures, have pressure sores that would be irritated by the robot exoskeleton, weigh more than 250 pounds or have blood pressure problems. 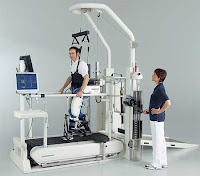 Therapy Information
Lokomat® Training for Spinal Cord Injury
(Also known as paraparesis, tetraplegia, tetraparesis)
Spinal Cord Injury (SCI) is a paralytic condition caused by complete or partial damage to the spinal cord. It is characterized by the loss of motor, sensitive, and vegetative functions below the lesion. This condition has the following phenomena:
• Total or partial loss of the ability to perform controlled movements in the affected body areas.
• Sensitivity to touch, pain, temperature, and depth are lost or reduced.
• The vegetative paralysis causes, among other things, problems with bladder and rectal function, impaired sexual function, problems with perspiratory gland function, and problems with peripheral circulation and temperature regulation.
Paraplegia results from damage to the spinal cord at chest level or in the lumbar spine area, with resulting paralysis of the muscles of the torso and legs.
Tetraplegia results when the arms are also paralyzed. Damage to the cervical spinal cord (from C4) also impairs the functioning of the respiratory system.
Complete paraplegia is the term used to refer to a total loss of function of the spinal cord, while with incomplete paraplegia, the spinal cord is only partially damaged.
What are the expected effects of training with the Lokomat system on paraplegic patients?
Lokomat training is used mainly for patients with incomplete SCI; in other words, for patients who still have some residual function in their arms and legs. The walking ability of such patients can be improved with the support of the Lokomat system. The gait orthosis can be adjusted to the individual functional level of each patient, and supports the patient as much as necessary, but as little as possible. A large number of repeated movements that represent a physiological gait pattern give patients the best possible help as they work to improve their walking
ability.(1, 2, 3) While Lokomat training does not cause any functional development in cases of complete paraplegia, but it can lead to an improvement in secondary effects, such as: stimulating the metabolism, stabilizing circulation, reducing spasticity and long-term improvement of the intestine and bladder function.
Note: At this point, we would like to expressly state that these improvements are not due exclusively to training with the Lokomat system. They must always be regarded as a result of Lokomat training in combination with other physiotherapeutic interventions.
How often should training take place?
We recommend three to five times per week for 30 - 45 minutes (depending on the patient’s stamina and the therapy plan). For more information, please see the “Recommendations for clinical practice” in the Products/Lokomat/Interest Groups section of our website.
Publicat de Mihaitza la 03:03 6 comentarii: